Mother Teresa - An Autograph Study of Her Signature

Mother Teresa – Study of Her Signature – Be Educated

Collecting autographs of Mother Teresa is very popular. Yet many collectors and even sellers of autographs are not familiar with her genuine signature.  The following is just a short version of my article on Mother Teresa’s signature which was published in the fine autograph magazine Autographen-sammler  August 2016 issue.

Mother Teresa was the recipient of the 1979 Nobel Peace Prize. Most items in the collections of autograph collectors are found dated after 1979. Anything genuinely signed by her before that date can be considered scarce.

For years Mother Teresa was one of ten women around the world that Americans most admired.

Collectors and even sellers of autographs must be extremely cautious when purchasing something described to be signed by Mother Teresa.  Her mail was voluminous and depending on her day a rubber stamp signature of hers was used to answer letters.  See illustration below. 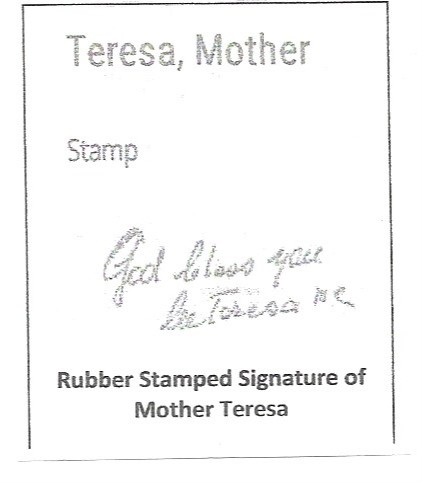 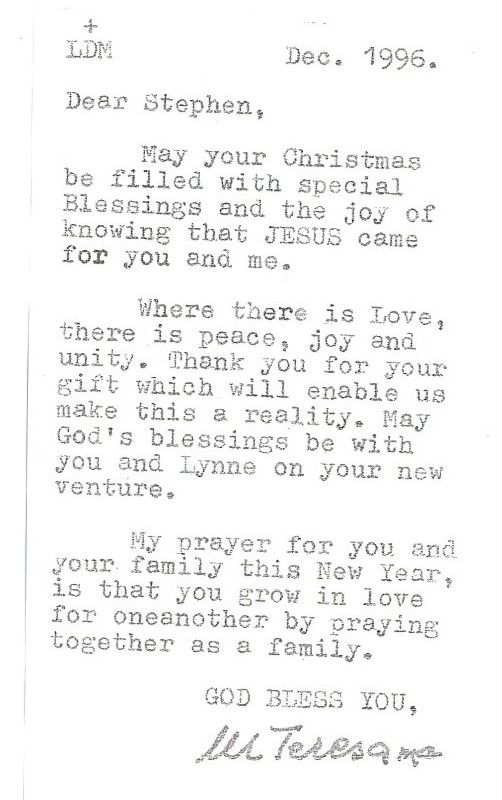 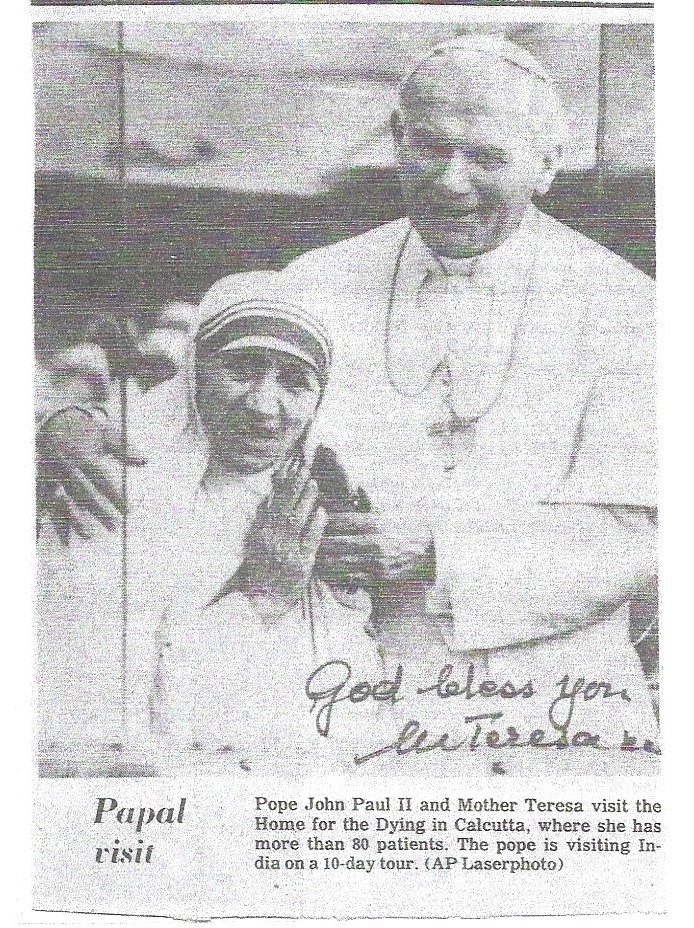 As a start, pay attention to the capitol “M” in Mother and the second “e” in Teresa. There are other things you may notice but let’s start here to keep it simple.  Take notice that in a genuine signature of Mother Teresa, the “M” starts at the bottom, way to the left.  There are variations in the “M” depending on her feelings and stress of the day, but still all similar.  The second “e” in Teresa is mostly a match as to the first “e” in Teresa.

After much research I discovered Mother Teresa had a secretary sign her name.  The secretary did try to imitate a genuine signature and writing of Mother Teresa. She obviously was somewhat successful as the secreatry fooled a few sellers of autographs.  I discovered a receipt for $15.00 from 1980 where the Treasurer of Missionaries of Charity signed her name. See illustration below. 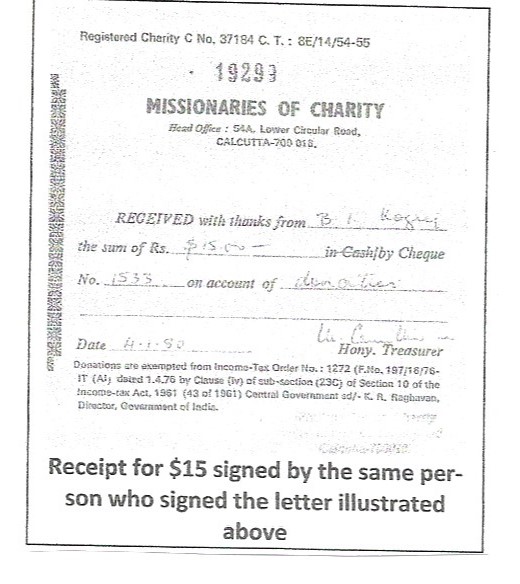 This receipt came with the T.L.S dated January 8, 1980. See illustrated below. 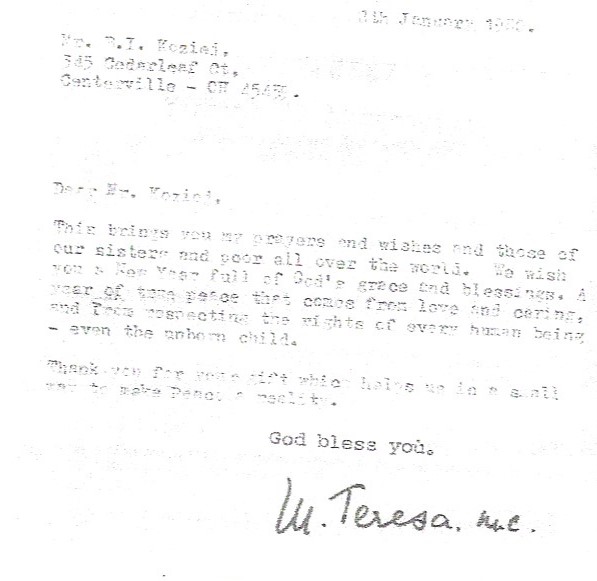 Take notice both the receipt and T.L.S. are made out to Mr. B.I. Koziej.

In addition as early as 1965 another Mother Teresa T.L.S surfaces. The signature on the 1965 and 1980 T.L.S.’s are signed by the same person, but not Mother Teresa.  T.L.S. dated 1965 with secretarial signature illustrated below. You did your own research on the four genuine Mother Teresa letters illustrated at the beginning of this study.  I hope you noticed as I did that in the Capitol “M” of Mother starts to the left on the bottom line.

In the 1965 and 1980 letters the “M” starts at the top, just exactly like the secretarial “M" in the receipt.  Back to the “e” in Teresa. In genuine examples both “e’s” are written basically the same way.  In the secretary’s signature of Mother Teresa the second “e” is quite different that the first “e”.  If you look closely you will also see other differences between a genuine Mother Teresa signature and that of the secretary.

Moving along take notice of the difference in the “G” in God in both the genuine and secretarial signatures.  Go further and notice the differences in the second “s” in bless and the “y” in you.

After this discovery, we notified the seller of the 1980 letter that it was signed by a secretary.  Their answer is just another illustration of a useless C.O.A. and being impressed with themselves. Their reply: “Thank you for contacting us, this specific document has been authenticated multiple times (once most likely by Herman Darvick who worked for them).  Please note that _____ ____ _____ is a leader in the autograph & manuscript field with an inventory that exceeds 236,000 documents. We have been in business since 1981, are a long-standing UACC Registered Dealer #_____  and a  member of the Manuscript Society. In addition our Certificate of Authenticity, “COA”, is recognized by every major insurance company……..” Best regards ____ _____.

So much for useless COA's and so much for being a braggadocio about your credentials, especially when proven wrong.

The successor of Mother Teresa is M. Nirmala and she seems to be autograph friendly.