The following is just part of the insanity that goes on behind the scenes with ethics complaints files against favored members in the U.A.AC.  This is just a sample of what regular members of the UACC are not able to hear.    This is a story about a UACC member, officer and now self appointed president of the UACC handles a complaint.  Acting poorly like this can get you an award in the UACC.

Ann Boyle was a member in good standing in the UACC. All she did at a Florida autograph show on May 19, 1996 is purchase a signed photograph of Richard Gere from Al Wittnebert.  Not long after, she discovered the signature of Richard Gere on the photograph was not genuine. The way it was handled by Al Wittnebert and his friend on the ethics board is amazing.

A copy of the original complaint from Ann Boyle is illustrated below. 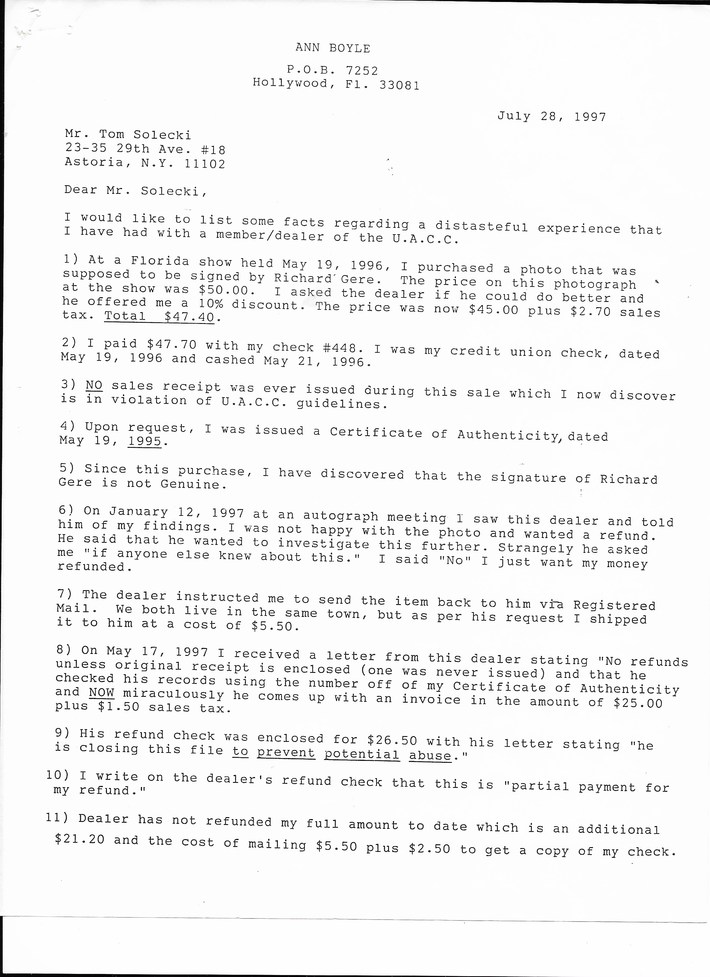 Complaint filed with Tom Solecki, Chairman of UACC Ethics Board

1/2 of the complaint- Copy of Ann Boyle’s check 3) No sales receipt issued during the sale by Wittnebert.  Violation of UACC Rules.

6) Strangely he asked me “if anyone else knew about this…”

8) No refunds unless original receipt enclosed (one was never issued). Miraculously Wittnebert at a later date after the complaint is filed comes up with an invoice (typed) for $25.00 plus $1.50 sales tax.  PLEASE NOTE INVOICE IS FOR ONE SIGNATURE, Richard Gere. 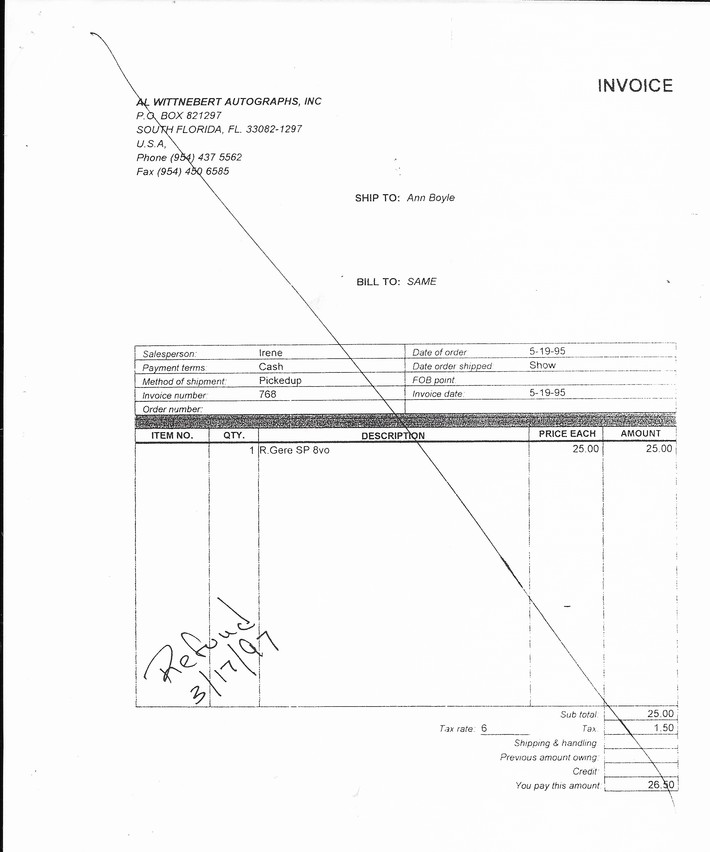 Al Wittnebert creates an invoice after the fact

12) Al Wittnebert has chosen to close this account “to prevent potential abuse.”

A partial response from Tom Solecki, Chairman of the UACC Ethics Board (friend of Al Wittnebert for many years). Solecki states “after careful reading….against fellow U.A.C.C. member/dealer (Treasurer) Al Wittnebert. It has been determined by  the U.A.C.C. Ethics Board that a violation of the code of ethics does not exist…..”

Solecki adds: there is no indication on your original check in the amount of $47.70 that it was for one autograph….  (Al Wittnebert’s invoice states just one autograph, Richard Gere)  What is Tom Solecki implying on behalf and in favor of Al Wittnebert?

How many violations has the reader so far come up with?

Non issuance of a invoice at time of sale.

Quasi invoice created at a much  later date,  and the date is wrong by one year matching the COA.

Invoice indicating half the amount of the purchase.

Invoice is typed…how many times, if ever, have you seen a dealer at a show bring a typewriter?

Al Wittnebert refunded half the cost of the fake autographed photo.

Settlement:  Ann Boyle, very upset, contacted Steve Koschal (Director of the UACC) with copies attached. Shortly after Tom Solecki calls Al Wittnebert on the phone to avoid a paper trail. The dealer, Al Wittnebert, in an effort to stop the flow of paperwork finally refunded the balance due the collector.