I was recently asked during my 50 plus years active in the hobby of autographs “what is the most frustrating thing I have experienced?”

There are only a few things along this line that I have experienced through the years but the longest running frustration is without question is obtaining the yearly financial records from long time  Treasurer of the UACC,  Al Wittnebert.

This story is not written to attack or disparage any single person or group.  It’s only goal is to open the  the financial records of the Universal Autograph Collectors Club.  Records that are mysterious and have been suppressed for as long as many can remember.  WHATEVER THE PROBLEMS HAVE BEEN AND OR STILL ARE, i'M SURE THEY CAN BE CORRECTED!

A letter written to the Shareholders of the UACC in 1996 by the club’s accountant speaks volumes. It caught the interest of many. Even the club’s accountant is complaining about UACC financial records. Frustrated, I wrote to the president of the UACC, Bob Erickson. The following letter went unanswered.

Letter complaining to the UACC President about Al Wittnebert For my efforts with all good intention, the treasurer began to write many false statements about me and created a case of Censure against me.  The created censure was posted and still remains on the UACC web site.  One case he brings up I agree with. Posted is “Mr. Koschal has made several attempts to access the UACC Archives, particularly the Officials (Al Wittnebert only) expense reports.  Mr. Koschal will not give reasons for the requests which indicates strongly that he wants to discredit members of the Executive Board with unfounded allegations.”  Mr. Wittnebert loves to use the words “unfounded allegations.”  Of course, this is not correct and for the most part how can one prove anything without seeing the records.  Mr. Wittnebert hides from members that one of my allegations was asking at club meetings “where is the club’s warehouse?”  Another disgusted Board member, Cordelia Platt told me she knew for a fact that the club warehouse was in Mr. Wittnebert’s garage.  He was taking out of the club treasury $2,000 a year for renting a section of his garage. When I exposed this the items in the “warehouse” was apparently moved to his friends garage.

Other concerns about “unfounded allegations” was when Cordelia and Tom Platt told me that when they ran the autographs shows around the United States that Al Wittnebert would call almost every hour to see how much cash came in from attendance and other sales.  Wittnebert insisted that the cash be mailed to him the next day via registered Mail.

Multiple presidents of the UACC has stated for years how UACC shows continue to lose money. One UACC member took the reins and ran an Official UACC Florida show.  This individual along with my guidance ran a very successful show, making money.  The outcome of the show was reported in Autograph Collector Magazine. The following is a portion of the show promoters comments. 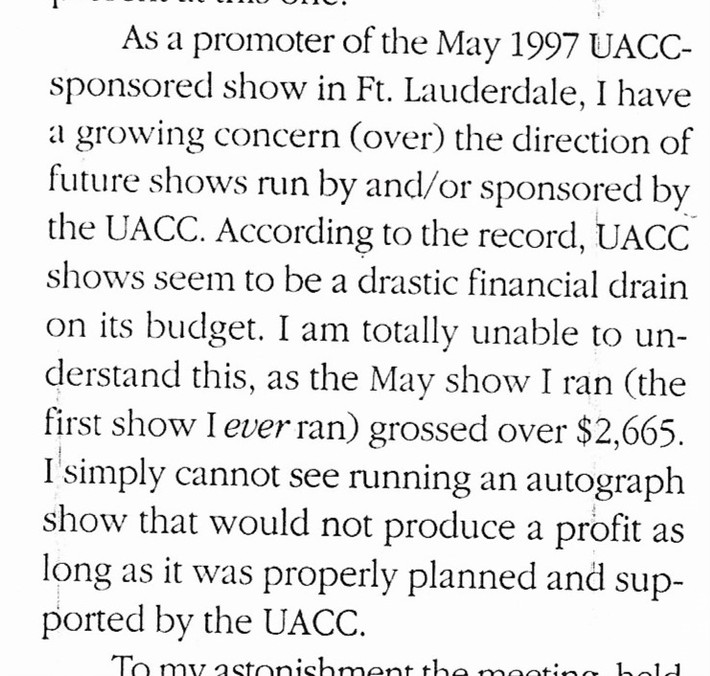 Not one mention of the shows success was allowed to be published in the club’s journal Pen & Quill.

Collectors believed they knew what was going on and many sent emails similar to the following.  This partial email is from a very well known collector and member of the UACC

Email with words of wisdom

Let’s post one more “unfounded allegation” that should open some eyes.   After reading the following, what more does one need to request the opening of the club’s financial reports.

We are not talking small potatoes here. During these times the UACC was taking in more than $50,000 per year with very little expenses for a very long time. The shows held around the United States are gone. The club’s yearly printed membership directory has been gone since 1998.  Many, many issues of the club’s quarterly magazine were never published. Not only did the club save publishing costs but the cost of postage as well.  What have been the club’s expenses?  Possibly the minimum maintenance of a web site.

It is obvious that even the president of the UACC did not know what was going on with the club treasury.  He just accepted to club was loosing money and that they were in trouble financially for years. He wrote the following in the club journal Pen & Quill.

The UACC makes claims that all officers of the club are volunteers.

It has been obvious the UACC has been basically  dormant, some same comatose.  Wittnebert without the club membership voting has declared he has assumed the position of president as well. There was nothing published why the UACC V/P did not assume the position.  Wittnebert opens up a GOFUNDME page with the reason “to help raise money for expenses we provide on a daily basis.” You can pay directly through PayPal to Al Wittnebert.

More later on the non response to UACC members extremely serious Ethics complaints, stealing of members stories by Board Members and giving themselves awards, selling fake autographs by Board Members, ignoring an attempt to hire an accounting firm to count club’s votes, destroying evidence of non legit billing, and serious allegations regarding a Board Member by autograph collectors.

Most interesting is the UACC Dealer listing.

Many members still listed have not renewed their membership for many years.  Other life-time members listed have requested to no longer be members of the UACC.   Mary A. Benjamin Autographs  has gone out of business many years ago is still listed as a member. There are still dealer members of the UACC supporting the club, many who just want to be able to exhibit a logo giving the impression they belong to some group.

It is in the best interests of the International Autograph Community that this autograph club that has been in business since 1965, stay in business.   With proper guidance and transparency, some with the hobby’s best interests in mind are willing to help the UACC and the Treasurer avoid the problems of the last few decades and make the club whole once again.  It is the goal of this article to have some of the autograph community sit down with Al Wittnebert and work it out so that collectors and dealers can regain faith in the UACC and rebuild its membership.